The Borough of Lavallette was formally incorporated in late December of 1887, but Lavallette, as a place name is almost ten years older. In February of 1878, the directors of the Barnegat Land Improvement Company filed a plot plan with Ocean County, designating the tract they purchased from Michael W. Ortley as "Lavallette City by the Sea." The name honored U. S. Navy Admiral Elie A. F. LaVallette, who distinguished himself as a young lieutenant aboard Commodore Thomas McDonough's flagship in the battle of Lake Champlain and later commanded the U.S.S. Constitution. Of French descent, the Admiral legally anglicized his name to Lavallette in 1830. His son, A. T. Lavallette, was secretary of the Land Improvement Company. Latter a US Navy Destroyer was named after the admiral. 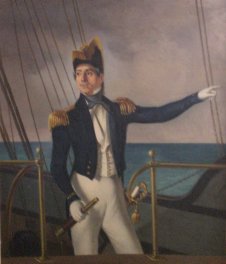 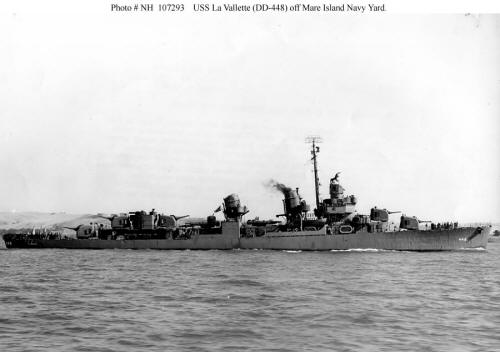 The Lavallette area shares a common history with other barrier island beaches of central New Jersey. The earliest human inhabitants along these beaches almost certainly were Lenni-Lenape Indians, who made an annual spring migration from their inland homes to the sea to harvest the abundant fish and shellfish. They were, however, strictly summer visitors. Like most of those who followed centuries later, they forsook the shore at the first signs of autumn.

The first recorded description of the area is the oft-quoted passage from the journal of Robert Juet, the first mate on Henry Hudson's "Half Moon.” Sailing north past Barnegat Inlet in 1609, he noted that the coast was "all broken islands," with a "great lake of water behind.” In addition, he added, “this is a very good land to fall in with, and a pleasant land to see.” It was not until the mid-1600, however, that Europeans set foot on the beaches south of Manasquan Inlet. Whalers based in New England and Long Island, set up temporary camps along the coast. Shortly thereafter, as Dutch settlers began to establish villages on the mainland, some of the villagers "worked the beaches" as anglers and whalers. Although settlement of the mainland continued, and Toms River was a flourishing port in pre-Revolutionary days, the nearby ocean beaches remained all but uninhabited through the 18th century and well into the 19th. Before 1850, the only substantial structure in the neighborhood of Lavallette was a hunting lodge that became famous as the Chadwick House. It was built in 1830 near the site of today's Ocean Beach Marina.

For much of the time, from about 1720 to 1812, the peninsula stretching from Bay Head ended at Cranberry Inlet that cut through from the ocean to the bay near what is now the northern boundary of Seaside Heights. The Peninsula was known as Squan Beach, and the island between Cranberry and Barnegat inlets was Island Beach. For some time after Cranberry Inlet closed, the distinction between the two areas was maintained, at least locally, and when the Land Improvement Company filed its 1878 map the location was identified as Squan Beach.

That map could serve as a guide to Lavallette today, from Trenton Avenue to Ortley Avenue., with a few adjustments to the north-south thoroughfares. The map shows an Ocean Avenue, running the length of the town on the beachfront, where the boardwalk is now located. There is, of course, Anna O. Hankins Blvd., which was created from the railroad right-of-way after the railroad came and went. Nor did Bay Boulevard exist. The area of Bay Boulevard was then coves and creeks, which were later filled in. The map also defined the basic character of the town, with uncommonly broad streets, providing a sense of openness that became more valued as development progressed with uniform building lots of 50 x 100 feet. Later restrictions on height of buildings, the one lot--one dwelling rule, and a ban on commercial development of the oceanfront and bayfront has preserved this atmosphere and contributed to Lavallette's popularity as a family resort or home site.

Initial development was slow, however, since Lavallette was accessible only by steam launch or sailboat. The nearest railhead was Toms River. When the railroad crossed the bay at South Seaside Park and traveled north to Bay Head in 1881, following the line of what is now Route 35 South, it brought more visitors and prospective homeowners. Even so, when the election to establish the Borough was held in 1887 there were just 17 registered voters, and by 1910, the year-round population had grown only to 42 voters.

The summer population was expanding more rapidly, as evidenced by the construction of the Union Church in 1887 and the Yacht Club (then on the beachfront) in 1905. George Wilt opened the town's first store on the northwest corner of Reese and Grand Central Avenues. The Johnson brothers purchased it before the turn of the century, and it became the hub of the "business district," which consisted of several stores and a boarding house. Most of the early residents settled around this area. The Fairway Hotel, on the southeast corner of President and Grand Central Avenues, was the anchor. The 1887 election establishing Lavallette as a Borough was held at the Fairway Hotel. The railroad station also was at Reese Avenue, as was the town's dock. In those days, Bay Boulevard was a one-block stretch of sand and gravel from Reese to President Avenues.

The main industry in Lavallette in the early 1900’s was commercial fishing. Fish pounds—a net system used for catching or trapping fish—had been established in Sandy Hook around 1800, but it was not economically viable to maintain pounds on the Squan Beach peninsula until the arrival of the railroad in 1881. There were three fish pounds in Lavallette—one at the north end of town, one at President Avenue, and one at the south end of town. Chadwick Fisheries owned all of them. Fish were caught in the offshore nets. They were brought to the beach by ‘pound’ boats, packed in barrels and shipped to markets in Philadelphia and New York. Pound fishing was rough on boats, and Charles Hankins opened his boat building business in 1912 to keep up with the demand of replacing fifteen to twenty 33-foot pound boats a year. Offshore pound fishing was a strategic resource up to World War II. When the railroad stopped running after the war, shipping fish to market by trucks became too expensive. In 1948, the Chadwick Fisheries was the last to cease operations along the Jersey coast. Opening of the gravel road from Bay Head to Seaside Park along what is now Route 35 North in 1911, coupled with completion of a wooden vehicular bridge across the Bay at Seaside Heights three years later, provided some impetus to growth. It also reinforced the pattern of commercial development along Grand Central Avenue.

Elsewhere, the principal commercial sites in Lavallette were the Hankins Boat Works, established in 1912 on the bay front at Reese Avenue, Brackman Brothers' building supply complex at Magee Avenue, the railroad and several boat liveries along the bay front. With the advent of zoning, these businesses became non-conforming uses. Traces of these old “non-conforming businesses” remain; such as the bay front restaurant at Reese Avenue and Bay Boulevard and the remodeled AST Development, Inc. building and the tackle shop across the street from each other on Magee Avenue and Route 35 South.

Residential growth remained modest until the 1920's, when such amenities as electricity, running water, and gas became available and the borough installed a sewage system. By 1930, Lavallette was a well established, if still small, family resort. The year-round population had reached 287. The depression and World War II brought growth to a virtual standstill, but the post-war boom saw rapid expansion of both residential and commercial activity. Although railroad service ceased in 1947, it had become a negligible factor by then, outmoded by improved highways and automobiles. As early as 1937, the Ocean County Review in an editorial called for a "four-lane bridge across Barnegat Bay to meet present day traffic conditions." Those pleas were not answered until after WWII (and then only with a three-lane span). The opening of the Garden State Parkway in 1954 brought a torrent of traffic from North Jersey, and the higher and wider Tunney Bridge joined the Mathis Bridge. By this time, Bay Boulevard was completed and the construction (in 1960) of Route 35 South in the old railroad right-of-way added to the increase in growth. This contributed to an almost explosive growth in the late 1940’s and the 1950's, particularly in the southern portion of the town. It was in this period, too, that the trend toward year-round living at the shore began, producing significant increases in Lavallette’s population.

Between 1940 and 1960, the number of year-round residents increased by 164% from 315 to 832. Summer crowds escalated almost proportionately. More recently, the rate of growth has slowed. The 1970 census figure of 1,509 reflects primarily the annexation of West Point Island plus some real growth. The 1980 figure of 2,072 included the annexation of the Westmont Shores area (North Lavallette) for the first time. Today's population of about 2,471 represents a modest growth of about 400 since 1980.

Through all of this, however, the basic pattern of development was maintained. Commercial uses spread along Grand Central Avenue, but the integrity of the boardwalk, the bay front, and the more recently accessible space along Route 35 South was protected. Lavallette today is a mature town, with little buildable space available. School facilities were expanded three times between 1955 and 1981. Despite the growth in permanent population, Lavallette remains primarily a summer resort. The qualities that make it popular – the clean sand beaches (its greatest natural asset) and the fruits of sound planning for more than a century – need to be protected and nourished for the benefit of the economy as well as for the enjoyment of its residents. 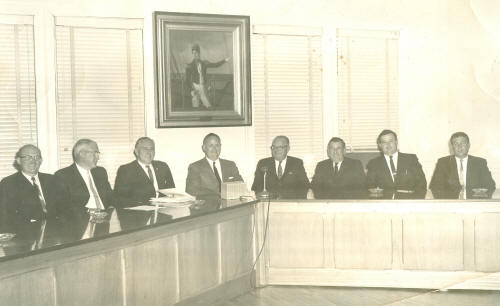 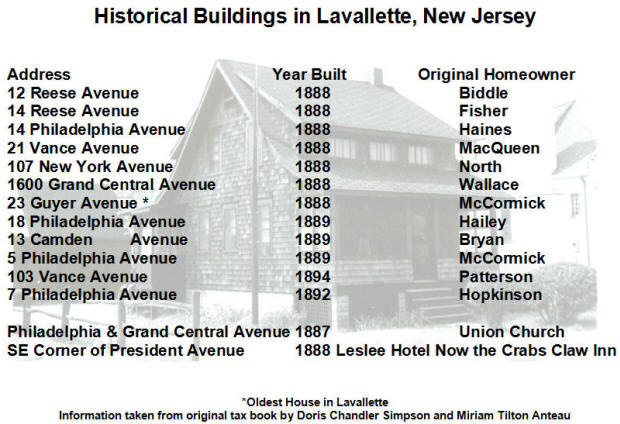 "The History of Lavallette, Second Edition"
Sold Out!